Getting to Know the Fathers: Ignatius of Antioch

Behind all of Ignatius’ words and teaching is the heart of a true pastor and follower of Jesus. His concern, like that of St. Paul, was always the welfare and faithfulness of the individual Christians who made up the congregations to which he wrote, and the welfare of those congregations corporately.

“Suffer me to be eaten by the wild beasts, through whom I can attain to God. I am God’s wheat, and I am ground by the teeth of wild beasts that I may be found pure bread of Christ…Let there come on me fire and cross, and struggles with wild beasts, cutting and tearing asunder, rackings of bones, mangling of limbs, crushing of my whole body, cruel tortures of the devil, may I but attain to Jesus Christ!”1

The year was about 108 AD, and the old man who penned these words was being hauled to Rome for execution. He had committed no wrong. He had done no violence. His only crime was to have been a prominent Christian and bishop of the church in the great Syrian city of Antioch, the same city from which Paul and Barnabas began their first missionary journey.2 He was, assuming tradition is correct, a disciple of St. John and was consecrated as the third bishop of Antioch in the year 69AD, following St. Peter and his successor, Evodius, in that office. According to the fifth century theologians Theodoret of Cyrus and St. John Chrysostom, it was St. Peter himself, as well as the apostles who consecrated him to the office, who recommended Ignatius be named bishop.3 Regardless of whether all these traditions concerning Ignatius are accurate, it is extremely probable that he would have come into contact with several of the apostles during his lifetime.

According to the historian Eusebius, writing over two hundred years later, Ignatius “was brought from Syria to Rome and became food for the wild animals because of his witness to Christ. He was brought through Asia under the strictest guard, strengthening the Christian community by speech and encouragement in every city where he stayed.”4 Not only did he strengthen those he met on his journey to martyrdom, but he also wrote several letters, seven in total, to various congregations along his route. Apart from the Biblical Epistles, these letters are among the earliest and most important documents bearing witness to the faith of the Church during and immediately following the apostolic era.

The early date of these letters makes Ignatius and the substance of what he wrote extremely relevant to our times. Those hailed as academics and experts often make false statements about early Christianity: Jesus wasn’t considered divine by Christians until well after the apostolic era, or the books of the New Testament really weren’t considered Scripture until the fourth century Council of Nicaea, or there were many equally valid variants of Christianity in the second century, or early Christians had not yet developed a clear ecclesiology. Ignatius not only disproves such spurious notions, but proves that the Church in the time of the apostles and the generation following already had a clear understanding of New Testament Scriptures and a solid confession regarding Christ and the Christian faith, a confession that remains the Church’s confession today.

In his seven letters, Ignatius quotes from, alludes to, or borrows specific phrases from nearly every book in the New Testament, demonstrating that already in his day the Church read these books as authoritative Scripture. Concerning the faith itself, Ignatius demonstrates a fully formed Christology and soteriology. In his letter to the Smyrnaeans, for example, he writes with creed-like clarity: “I give glory to Jesus Christ, the Son of God who has thus given you wisdom; for I have observed that you are established in immovable faith, as if nailed to the cross of the Lord Jesus Christ, both in flesh and spirit, and confirmed in love by the blood of the Lord, that He is in truth of the family of David according to the flesh, God’s Son by the will and power of God, truly born of a Virgin, baptized by John that, ‘all righteousness may be fulfilled by Him,’ truly nailed to a tree in the flesh for our sakes under Pontius Pilate and Herod the Tetrarch… that ‘He might set up an ensign’ for all ages through His resurrection, for His saints and believers, whether among the Jews or among the heathen, in one body of His Church.”5 Here we may clearly see the vibrant faith of the earliest Christians in the full Divinity of Jesus, in the two natures of Jesus, in the Virgin birth, baptism, death, and resurrection of Jesus, and in the unity of the holy Church gathered to Jesus by His Gospel and blood.

Ignatius also bears witness that the church of his day, though assaulted by heretics and their heresies, was to have no tolerance for false teaching or false teachers. He writes in general: “I beseech you, therefore, yet not I but the love of Jesus Christ, live only on Christian fare [i.e. doctrine], and abstain from strange food, which is heresy. For these men mingle Jesus Christ with themselves in specious honesty, mixing, as it were, a deadly poison with honeyed wine, which the ignorant takes gladly in his baneful pleasure, which is death.”6 But Ignatius also addresses very specific heresies that afflicted the early Christians, namely, the heresies of the Judaizers and of the gnostic docetists.

In his letter to the Magnesians, Ignatius exhorts the congregation: “If we are living now according to Judaism, we confess that we have not received grace,”7 and, “it is monstrous to talk of Jesus Christ and to practice Judaism. For Christianity did not base its faith on Judaism, but Judaism on Christianity.”8 And to the church in Philadelphia he writes: “But if anyone interprets Judaism to you, do not listen to him; for it is better to hear Christianity from the circumcised than Judaism from the uncircumcised. But both of them, unless they speak of Jesus Christ, are to me tombstones and sepulchers of the dead…”9

Concerning the gnostics and docetists, who taught that Jesus only appeared to have real flesh (for matter, they taught, was contrary to the divine and spiritual) and therefore didn’t really suffer and die on the cross, he writes: “Be deaf, therefore, when anyone speaks to you apart from Christ, who was of the family of David, and of Mary, who was truly born, both ate and drank, was truly persecuted under Pontius Pilate, was truly crucified and died in the sight of those in heaven and on earth; who also was truly raised from the dead, when His Father raised Him up, as in the same manner His Father shall raise up in Christ Jesus us who believe in Him, without whom we have no true life. But if, as some affirm who are without God—that is, who are unbelievers—His suffering was only a semblance, (but it is they who are merely a semblance), why am I a prisoner, and why do I even long to fight with beasts?”10

St. Ignatius waxes most eloquent, however, when speaking about the unity of the Christian Church as the congregation is gathered around her pastors (bishop and presbyters) and to her Lord in the Eucharist, which unity he likens to a symphonic chorus: “It is fitting that you should live in harmony with the will of the bishop, as indeed you do. For your justly famous presbytery, worthy of God, is attuned to the bishop as the strings to a harp. Therefore by your concord and harmonious love Jesus Christ is being sung. Now do each of you join in this choir, that being harmoniously in concord you may receive the key of God in unison, and sing with one voice through Jesus Christ to God the Father…”11

Here the martyred bishop has much to teach the church of our day. Ignatius presents what many would argue is an exceedingly high view of the office of the ministry (not to mention a fully formed tripartite office of bishop, presbytery and deacons). But that view is anchored in his understanding that the pastors are Christ’s servants to teach His Church and to deliver to His Church the life-giving Communion of His body and blood. For Ignatius, then, opposition to the bishop (assuming the bishop is faithful and is no heretic) is opposition to Christ. And to reject the assembly of the Church around the bishop and the rest of the clergy is to step outside of Christ and outside of God. “Let no one be deceived, unless a man be within the sanctuary he lacks the bread of God…So then he who does not join in the common assembly, is already haughty and has separated himself…[L]et us then be careful not to oppose the bishop, that we may be subject to God.”12 And again, “As many as belong to God and Jesus Christ,—these are with the bishop. And as many as repent and come to the unity of the Church,—these also shall be of God…Be careful therefore to use one Eucharist (for there is one flesh of our Lord Jesus Christ, and one cup for union with His blood, one altar, as there is one bishop with the presbytery and the deacons my fellow servants), in order that whatever you do you may do it according to God.”13

Ignatius is important to the Church today because he addresses so many theological points and gives such clear witness to the faith at such an early point in the Church’s history. But behind all of Ignatius’ words and teaching is the heart of a true pastor and follower of Jesus. His concern, like that of St. Paul, was always the welfare and faithfulness of the individual Christians who made up the congregations to which he wrote, and the welfare of those congregations corporately. Like all true martyrs, his desire for himself was to be united with Christ Jesus, and like all true pastors his desire for others was that they too be united with their Savior now in the Church and forever in eternity through faith. May the Lord grant that we all, whether torn by wild beasts or not, “attain to Jesus Christ.”

Eighty Easters Ago: The Mass Resignation of Lutheran Pastors from the Nazified Church of Norway

The Wittenberg Option in Casper, Wyoming

A Plea for America

Rev. David Kind is Pastor of University Lutheran Chapel in Minneapolis, MN, and teaches early and medieval history and literature at Wittenberg Academy. 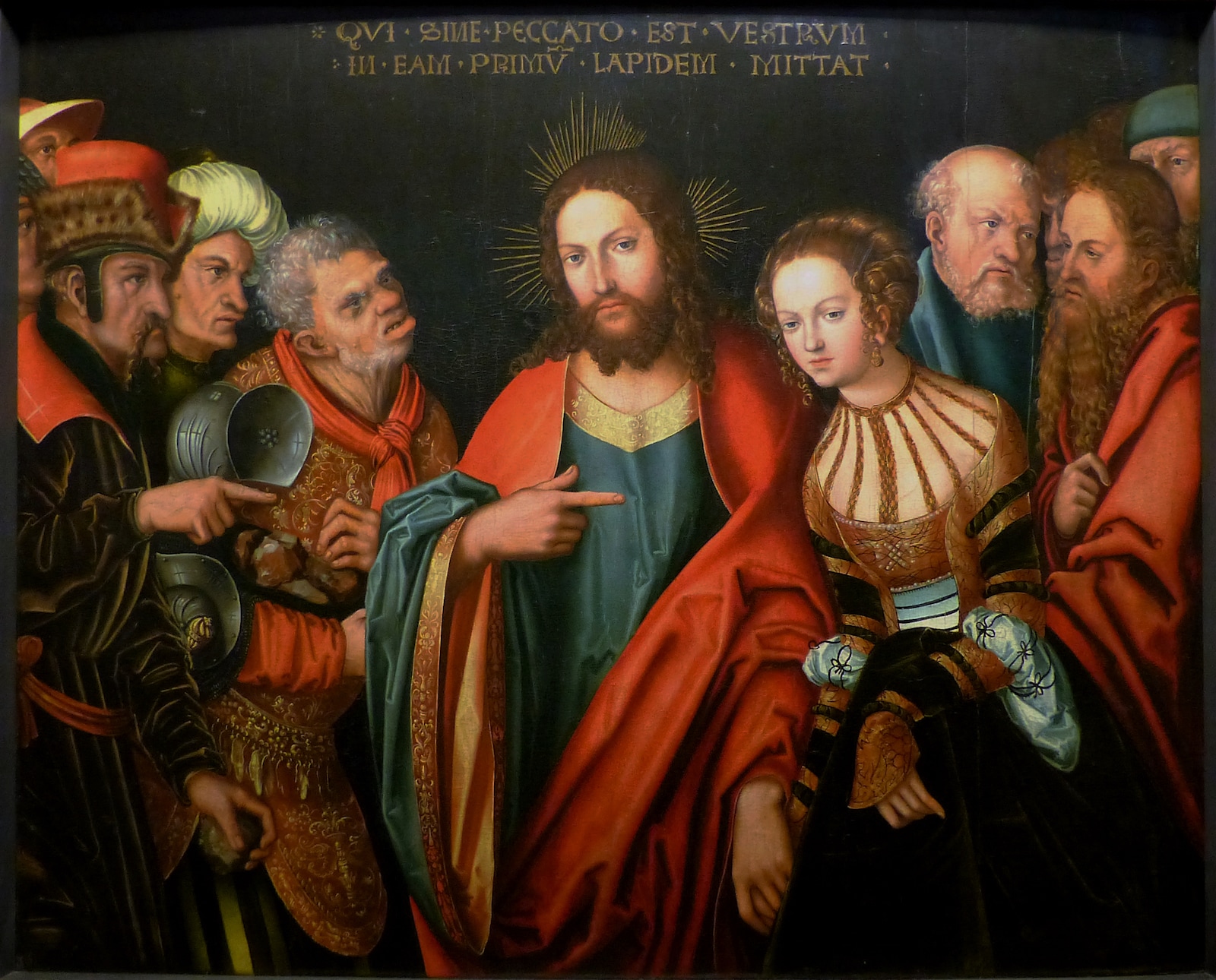 We are not allowed to imagine the woman’s sin or judge the menacing crowd. Instead, we are forced to confront our own sin, and the merciful face of our Savior.

The film has a wondrous spirit of adventure and discovery… Setting off on an expedition with the accompanying exploration and risk is a needed vision—especially as the modern world has progressively enshrined the idol of “safety” in the hearts of millions.

It is a valid and wise institution of our faithful God that he has given us a spiritual storehouse in the memory, in which we are able to store up seed for the future.